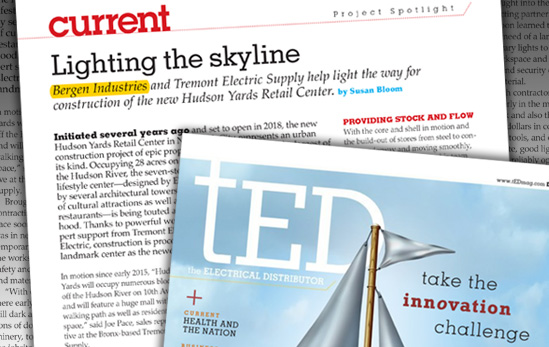 Initiated several years ago and set to open in 2018, the new Hudson Yards Retail Center in New York City represents an urban construction project of epic proportion and is considered the largest of its kind. Occupying 28 acres on the west side of the city overlooking the Hudson River, the seven-story, 1-million-square-foot retail and lifestyle center—designed by Elkus Manfredi Architects, anchored by several architectural towers, and scheduled to feature a variety of cultural attractions as well as more than 100 high-end shops and restaurants—is being touted as Manhattan’s newest luxury neighborhood. Thanks to powerful worklights from Bergen Industries and expert support from Tremont Electric Supply and contractor Zwicker Electric, construction is proceeding on schedule and positioning this landmark center as the newest jewel in the Big Apple’s skyline.

In motion since early 2015, “Hudson Yards will occupy numerous blocks right off the Hudson River on 10th Avenue and will feature a huge mall with a walk ing path as well as residential space,” said Joe Pace, sales representative at the Bronx-based Tremont Electric Supply.

Brought into the project by longtime contracting partner Zwicker Electric, Pace soon learned that the workforce was in need of a large quantity of temporary lights to both illuminate the workspace and help ensure the safety and security of both workers and material.

“With contractors starting work there early in the morning while it’s still dark and also the presence of millions of dollars in copper piping, machinery, tools, and other materials on the jobsite, good lighting that had the ability to reliably operate 24/7 was critical,” Pace explained of the project’s unique conditions.

“Bergen Industries is a brand we’ve used before and its BLites are a qual ity fixture with an easy setup that our workers like,” noted Tom Carolan, director of purchasing for Zwicker Electric, an electrical contracting firm that serves the five boroughs of New York City.

“The product is very durable and reliable, Bergen Industries’s customer service is outstanding, and the price was right,” added Pace, who has since or - dered hundreds of BLite metal halide fixtures to support the 40 electrical contractors from Zwicker Electric who are on the job daily.

“With its excellent lighting coverage and great value, the product spoke for itself, but we made sure that we had the right product and quantity in place at the right time for the team,” Pace said. “In our line of work, we know everything is fine when we hear nothing and we haven’t had one return or failure. I’ve been on-site and the lights are very effective and have been the right product for the job.”

With the core and shell in motion and the build-out of stores from steel to concrete underway and moving smoothly, Carolan praised the support his team received from Tremont Electric Supply, with which his firm has worked for many years.

“Tremont brings in its own stock and flow, storing product in its warehouse, staging it for us, and ensuring the inventory we need,” said Carolan, who added that his crew has continued to purchase more lights through Tre - mont as the project has progressed.

“Whether we need early-morning or midday delivery, Tremont is right there for us and has been a great supplier that’s focused on service and support. Hudson Yards is a monumental project that’s turning out very well,” Car - olan added. “Bergen Industries’s BLites have been a superior product, and Tremont has been a true partner and team player.”

Pace is equally thrilled to be part of such a prominent job.

“Anytime we do anything that affects our city, I feel very proud,” said Pace, who’s worked on projects at such other iconic area locations as the New York Times building, the World Trade Center, Bank of America, and Yankee Stadium during his nearly 35-year career with Tremont. He added that his company is also supplying Bergen In - dustries’s BLites to the team constructing a new Nordstrom department store on 57th Street.

“Hudson Yards betters the city and will be a great addition to the New York City skyline,” he concluded.

Bloom is a 25-year veteran of the lighting and electrical products industry. Reach her at [email protected]. 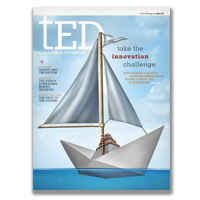